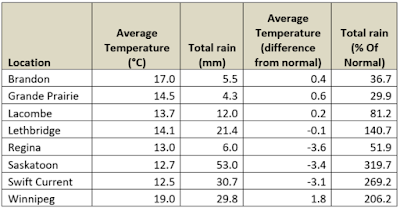 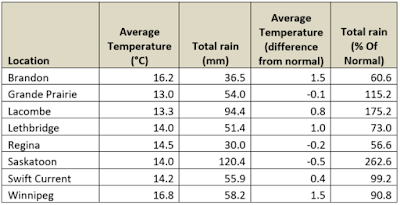 This past week (June 8-14, 2020), rainfall amounts were greatest across central regions of Saskatchewan and eastern Manitoba. Thirty-day cumulative rainfall amounts vary across the prairies.  Conditions are driest across the southern prairies.  Total 30-day rainfall at Brandon, Regina and Lethbridge have been less than 51.5 mm.  Rainfall amounts have been greater across central regions of Alberta and Saskatchewan.  Lacombe has reported 94.4 mm (175% of normal) and Saskatoon has had 120.4 mm 262% of normal) in the past 30 days.

The maps above are all produced by Agriculture and Agri-Food Canada.  Growers can bookmark the AAFC Current Conditions Drought Watch Maps for the growing season.  Historical weather data can be access at the AAFC Drought Watch website, Environment Canada's Historical Data website, or your provincial weather network.
Posted by Prairie Pest Monitoring at 23:48:00