Manitoba posts their 2016 Insect Survey and 2017 Forecast Maps up on their website! Take a moment to look over the following forecasts:


Manitoba growers can access general information on pest and beneficial insects from a series of fact sheets posted at the Insect section of their website.

More information related to the above maps and insects can be obtained by contacting Manitoba Agriculture entomologist John Gavloski.

All the Saskatchewan Insect Survey and Forecast Maps and more can be found on Saskatchewan.ca ! To view all our agriculture maps check out our Maps for Farmers and Agribusiness section.

More information related to the above maps and insects can be obtained by contacting Saskatchewan Agriculture's Scott Hartley or Danielle Stephens.

Researchers at Agriculture and Agri-Food Canada’s Saskatoon Research and Development Centre (SRDC), along with colleagues at the University of Guelph, Alberta Agriculture and Forestry, and the Canadian Food Inspection Agency found a new insect damaging canola in northeastern Saskatchewan and east-central Alberta. The new species, a midge, which has yet to be named and scientifically described, belongs to the genus Contarinia. It is similar in appearance to the swede midge, Contarinia nasturtii, commonly found in Ontario.

Currently, the only confirmed symptom of damage by this insect are “bottle”-shaped galled flowers that form as a result of larval feeding inside flowers. Damaged flowers do not produce pods or seeds. 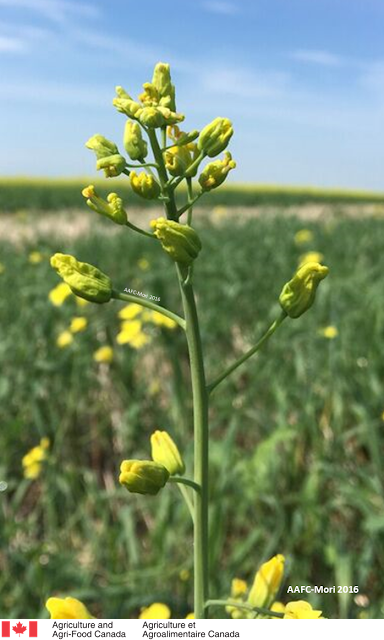 How the new species was confirmed
For years there have been accounts of differences between swede midge populations in Saskatchewan and Ontario, including adult size, the number of generations per year, and the type and amount of damage reported. These hints, combined with extremely low capture rates of adult swede midge in pheromone-baited traps in Saskatchewan despite apparently high rates of adult swede midge emergence caught the attention of Dr. Boyd Mori, a trained chemical ecologist and new research scientist at the SRDC.

Dr. Mori collected adult midges from soil emergence cages and reared larvae found in infested flowers. The resulting adult midges were sent to preeminent North American swede midge researchers at the University of Guelph, Dr. Rebecca Hallett and James Heal who immediately noticed differences between the midge from Saskatchewan and swede midges from Ontario: midges from Saskatchewan were more robust, had hairier wings and had slight differences in the antennae and genitalia compared to the swede midge.

These differences were confirmed by midge expert Dr. Bradley Sinclair with the Canadian Food Inspection Agency in Ottawa who also found several other physical differences. Using morphological differences, and DNA sequencing, the researchers concluded that the Saskatchewan midges were a separate species from the swede midge.

Economic Importance
While midge damage observed in Saskatchewan in 2016 appeared to be low in most fields, the economic impact of the new Contarinia midge is not known. Understanding pests and pest management is a priority of Agriculture and Agri-Food Canada and work is underway to formally describe and name this new species.

Alberta has posted their forecast and survey maps for several insect pest species occurring in field crops.  Visit their home page to view all the Alberta maps.

The following list and hyperlinks were provided by Shelley Barkley via the Alberta Insect Pest Monitoring Network.

Scott Meers, entomologist with Alberta Agriculture and Forestry, was interviewed and spoke about Alberta insect forecasts for 2017.  That series of five interviews can be access with the following hyperlinks:

Additionally, Alberta Agriculture and Forestry has updated their webpages with the following: