Insect of the Week (Jul 29) - Monarch vs. Painted Lady

The case of the Monarch butterfly vs. Painted Lady butterfly (also Viceroy butterfly)
An orange butterfly fluttered by. Was it a Monarch butterfly (Danaus plexippus)? Or a Painted Lady butterfly (Vanessa cardui)? If it’s a Monarch, it is species of Special Concern listed under the Species at Risk Act and is not a crop pest. Instead, it’s larvae feed solely on milkweed (Asclepias spp.), typically found in wetland areas. Painted Lady larvae, on the other hand, feed on a wider range of plants including sunflower, canola, mustard, borage, soybean, Canada thistle, burdock, knapweed, wormwood and many other plant species. While neither species overwinter in Canada, Monarchs have regular migratory routes into Canada from Mexico through the USA; Painted Ladies are accidental tourists that are on occasion blown up from the US.
One important distinguishing characteristic is the distinct black band with white dots that outline the wings of Monarchs. Painted Ladies do not have this band; instead they have thin white markings along the scalloped wing edges.


Viceroy butterflies (Limenitis archippus) are even more difficult to tell from Monarchs. Viceroys are smaller than Monarchs and sport a black line running through the middle (side-to-side) of the hindwing. Like the Monarch, Viceroys are not crop pests as their larvae feed exclusively on trees of the willow family (willow, poplar, cottonwood).
For more information about Painted Lady butterflies, see the Insect of the Week page and our posts on the annual Monarch butterfly migration.
The case of the innocuous versus the evil twin: When making pest management decisions, be sure that the suspect is actually a pest. This can be challenge since insects often mimic each other or look very similar. An insect that looks, moves and acts like a pest may in fact be a look-alike or doppelganger.
Doppelgangers may be related (e.g. same genus) or may not be related, as in the case of monarch butterflies (Danaus plexippus) and viceroys (Limenitis achrippus).  Doppelgangers are usually relatively harmless but sometimes the doppelganger is a pest yet their behaviour, lifecycle or hosts may be different.

Correctly identifying a pest enables selection of the most accurate scouting or monitoring protocol. Identification and monitoring enables the application of economic thresholds. It also enables a producer to select and apply the most effective control option(s) including method and timing of application.  For the rest of the growing season, the Insect of the Week will feature insect crop pests and their doppelgangers.
Review previously featured insects by visiting the Insect of the Week page.

Week 16 and some interesting weather across the prairies!  Please bookmark the Blog or subscribe to receive the latest growing season information!

Please access the complete Weekly Update either as a series of Posts for Week 16 (July 25, 2019) OR a downloadable PDF. Be sure to check out the Insect of the Week - the rest of the growing season features doppelgangers to aid in-field scouting!

Questions or problems accessing the contents of this Weekly Update?  Please e-mail either Dr. Meghan Vankosky or Jennifer Otani.  Past “Weekly Updates” can be accessed on our Weekly Update page.

Subscribe to the Blog by following these easy steps!
Posted by Prairie Pest Monitoring at 02:18:00

This past week significant rainfall amounts were reported the parkland region of  SK and AB (Fig. 4).

The lowest temperatures (°C) observed the past seven days ranged from at least 14 down to at least 2 °C in the map below (Fig. 10).

The highest temperatures (°C) observed the past seven days ranged from less than 16 up to at least 30 °C in the map below (Fig. 11).

The maps above are all produced by Agriculture and Agri-Food Canada.  Growers can bookmark the AAFC Drought Watch Maps for the growing season.
Posted by Prairie Pest Monitoring at 02:17:00

Wheat Midge (Sitodiplosis mosellana) – Dry conditions in May and June have resulted in reduced emergence of adult populations across most of SK. Oviposition is well underway and larvae should be developing in wheat heads. Where wheat midge are present, the following maps indicate potential occurrence of eggs (Fig. 1) and larvae (present in wheat heads) across the prairies (Fig. 2). It should be noted that, based on fall surveys in 2018, wheat midge populations were expected to be low across most of AB and SK.

Monitoring:
When monitoring wheat fields, pay attention to the synchrony between flying midge and anthesis.

In-field monitoring for wheat midge should be carried out in the evening (preferably after 8:30 pm or later) when the female midges are most active. On warm (at least 15ºC), calm evenings, the midge can be observed in the field, laying their eggs on the wheat heads (photographed by AAFC-Beav-S. Dufton & A. Jorgensen below). Midge populations can be estimated by counting the number of adults present on 4 or 5 wheat heads. Inspect the field daily in at least 3 or 4 locations during the evening. 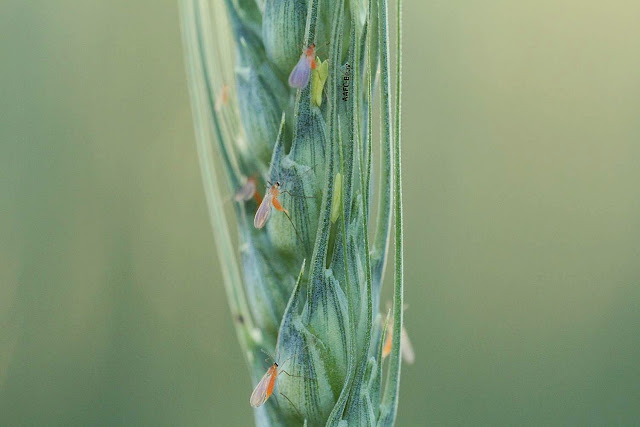 REMEMBER that in-field counts of wheat midge per head remain the basis of economic threshold decision.  Also remember that the parasitoid, Macroglenes penetrans (photographed by AAFC-Beav-S. Dufton below), is actively searching for wheat midge at the same time.  Preserve this parasitoid whenever possible and remember your insecticide control options for wheat midge also kill these beneficial insects which help reduce midge populations. 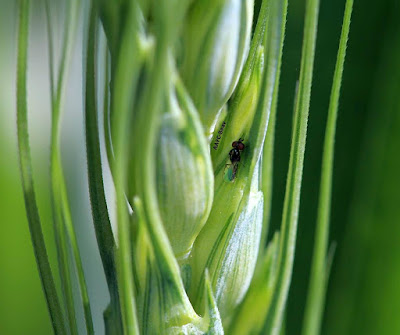 Economic Thresholds for Wheat Midge:
a) To maintain optimum grade: 1 adult midge per 8 to 10 wheat heads during the susceptible stage.
b) For yield only: 1 adult midge per 4 to 5 heads. At this level of infestation, wheat yields will be reduced by approximately 15% if the midge is not controlled.

Inspect the developing kernels for the presence of larvae and the larval damage.

Wheat midge and its doppelganger, the lauxanid fly, were featured as the Insect of the Week (for Wk10).  Check that post for help with in-field scouting for this economic pest of wheat!  The differences between midges and parasitoid wasps are featured as the current Insect of the Week (for Wk11).  Not all flying insects are mosquitoes nor are they pests - many are important parasitoid wasps that actually regulate insect pest species in our field crops.

Information related to wheat midge biology and monitoring can be accessed by linking to your provincial fact sheet (Saskatchewan Agriculture or Alberta Agriculture & Forestry).  A review of wheat midge on the Canadian prairies was published by Elliott, Olfert, and Hartley in 2011.

More information about Wheat midge can be found by accessing the pages from the new "Field Crop and Forage Pests and their Natural Enemies in Western Canada: Identification and Field Guide".  View ONLY the Wheat midge pages but remember the guide is available as a free downloadable document as both an English-enhanced or French-enhanced version.
Posted by Prairie Pest Monitoring at 02:16:00

Cool temperatures continue to result in reduced grasshopper developmental rates. Based on model runs, approximately 68% (50% last week) of the population should be in the 4th-5th instar and adult stages. Based on climate data, 80% of the population would be expected to be in the 4th-5th instar and adult stages. The following map indicates the average instar for grasshopper populations across the prairies (Fig. 1). Development is predicted to be greatest across southern MB and southeastern SK.
The Insect of the Week's Doppelganger featured GRASSHOPPERS for Week 14!!  Check out the excellent nymph photos to help your in-field scouting!

Biological and monitoring information related to grasshoppers in field crops is posted by Manitoba Agriculture, Saskatchewan Agriculture, Alberta Agriculture and Forestry, the BC Ministry of Agriculture and the Prairie Pest Monitoring Network.  Also refer to the grasshopper pages within the "Field Crop and Forage Pests and their Natural Enemies in Western Canada: Identification and management field guide" which is available as a free downloadable document in either an English-enhanced or French-enhanced version.
Posted by Prairie Pest Monitoring at 02:16:00

Bertha armyworm (Lepidoptera: Mamestra configurata) - Predictive model updates are completed for the growing season but can be reviewed here (Wk 14).

Important - Watch for updates from your provincial monitoring networks who are compiling cumulative pheromone-baited trap interceptions to assess risk levels in Alberta, Saskatchewan (updated 10Jul2019), and Manitoba (look on pg 8).

Biological and monitoring information related to bertha armyworm in field crops is posted by the provinces of Manitoba, Saskatchewan, Alberta and the Prairie Pest Monitoring Network. Also refer to the bertha armyworm pages within the "Field Crop and Forage Pests and their Natural Enemies in Western Canada: Identification and management field guide" which is a free downloadable document as both an English-enhanced or French-enhanced version.


Refer to the PPMN Bertha armyworm monitoring protocol for help when performing in-field scouting.  Use the images below (Fig. 1) to help identify egg masses and the economically important larvae in canola.

Now is the time to do in-field scouting for this insect pest.  Review the Insect of the Week which features bertha armyworm and its doppelganger, the clover cutworm!
Posted by Prairie Pest Monitoring at 02:15:00

Lygus bugs (Lygus spp.) - Last week's Insect of the Week's doppelganger was lygus bug versus the alfalfa plant bug.  This week the doppelganger is lygus bug nymphs vs. aphids!  both include tips to to discern the difference between when doing in-field scouting!

The economic threshold for Lygus in canola is applied at late flower and early pod stages.


Damage: Lygus bugs have piercing-sucking mouthparts and physically damage the plant by puncturing the tissue and sucking plant juices. The plants also react to the toxic saliva that the insects inject when they feed. Lygus bug infestations can cause alfalfa to have short stem internodes, excessive branching, and small, distorted leaves. They feed on buds and blossoms and cause them to drop. They also puncture seed pods and feed on the developing seeds causing them to turn brown and shrivel.

Scouting tips to keep in mind: Begin monitoring canola when it bolts and continue until seeds within the pods are firm. Since adults can move into canola from alfalfa, check lygus bug numbers in canola when nearby alfalfa crops are cut.

Sample the crop for lygus bugs on a sunny day when the temperature is above 20°C and the crop canopy is dry. With a standard insect net (38 cm diameter), take ten 180° sweeps. Count the number of lygus bugs in the net.

Sampling becomes more representative IF repeated at multiple spots within a field.  For lygus bug monitoring, sampling is most accurate when repeated at a total of 15 spots within the field.  Samples can be taken along or near the field margins. Calculate the cumulative total number of lygus bugs and then consult the sequential sampling chart (Figure C).

The economic threshold for lygus bugs in canola covers the end of the flowering (Table 1) and the early pod ripening stages (Table 2). Once the seeds have ripened to yellow or brown, the cost of controlling lygus bugs may exceed the damage they will cause prior to harvest, so insecticide application is not warranted.

Consider the estimated cost of spraying and expected return prior to making a decision to treat a crop.

Remember that insecticide applications at bud stage in canola have not been proven to result in an economic benefit in production.  The exception to this is in the Peace River region where early, dry springs and unusually high densities of lygus bug adults can occasionally occur at bud stage.  In this situation, high numbers of lygus bugs feeding on moisture-stressed canola at bud stage is suspected to result in delay of flowering so producers in that region must monitor in fields that fail to flower as expected.


Biological and monitoring information related to Lygus in field crops is posted by the provinces of Manitoba or Alberta fact sheets or the Prairie Pest Monitoring Network’s monitoring protocol.  Also refer to the Lygus pages within the new "Field Crop and Forage Pests and their Natural Enemies in Western Canada: Identification and management field guide" - both English or French versions are available.
Posted by Prairie Pest Monitoring at 02:15:00