Timing scouting activities is important. In addition to the Weekly Update, updated phenology models for insect pests on the Canadian prairies will be posted here during the growing season. Posts on this page will be accompanied by Twitter updates if you follow @vanbugsky.

Recent warm conditions have advanced the pupal development of bertha armyworm (BAW). Based on phenology model runs using weather data up to 31 May 31 2020,  pupal development will be close to 80% in some areas of south and central AB and SK as well as a region south of Winnipeg between 6 to 9 June, 2020. It is advisable to place BAW traps in the field when pupal development is 80%, so that traps are ready at least 5 to 7 days before adults begin emerging. Based on weather conditions up to May 31 and model output, BAW adults may begin to emerge by mid June so traps in Alberta, Manitoba, and Saskatchewan should be deployed in the next 7 to 10 days. Trap deployment in the Peace River region should occur approximately 10 days later.
Table 1. The estimated date on which bertha armyworm pupae will have completed 80% of pupal development and when adult moths are expected to begin emerging at six locations across western Canada. 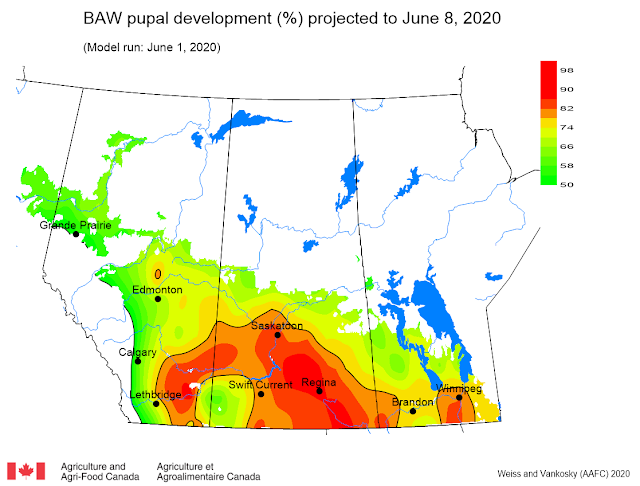 Weather conditions continue to be favourable for development of alfalfa weevil (AAW).  As of June 2, across most of southern SK and MB first instar development is nearing completion and the more individuals in the population should be in the second instar stage.

The models were run to produce simulation runs for next week (June 8, 2020) do determine AAW at Winnipeg and Lethbridge (graphs). As of June 8, results indicate that AAW populations in the Winnipeg region should be primarily in the third instar and populations near Lethbridge are predicted to be in the second instar.

Recent warm conditions have advanced bertha armyworm (BAW) pupal development. Compared to last week, development is 2-6 days faster and development is 2 days ahead of normal (based on climate normals). Based on BAW model runs, pupal development is nearing 80% in some areas of southern and central AB and SK. BAW adults may begin to emerge within the next 10 days. It is advisable to place pheromone traps in fields when pupal development is 80% to capture the full extent of adult flight activity. Based on this value, traps should be put out in SK and AB fields this week. 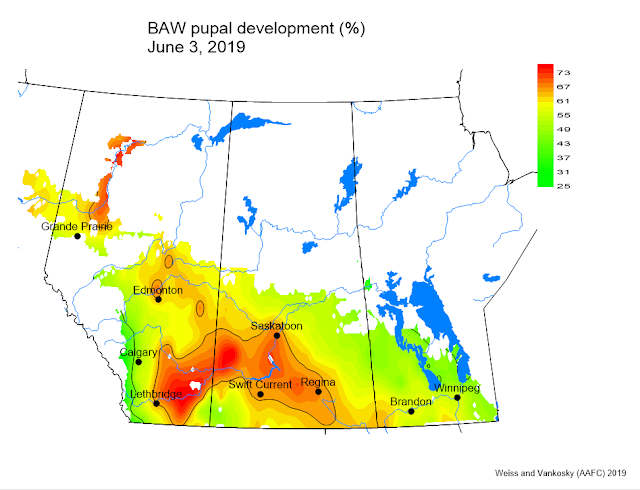 Weather conditions continue to be favourable for development of alfalfa weevil, if alfalfa weevil are present in your area. First instar development is nearing completion and the more individuals in the population should be in the second instar stage. In alfalfa fields near Brooks AB and Swift Current SK, larvae should start to reach the third instar stage late this week. 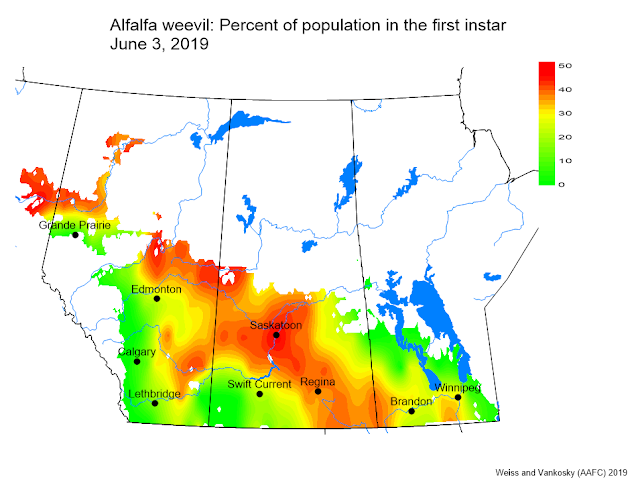 Figure 1. Percentage of alfalfa weevil population in the first instar, week of June 3, 2019. 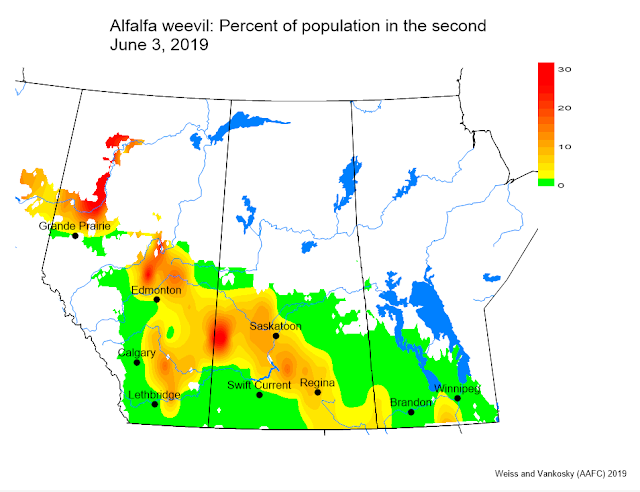 Figure 2. Percentage of alfalfa weevil population in the second instar, week of June 3, 2019. 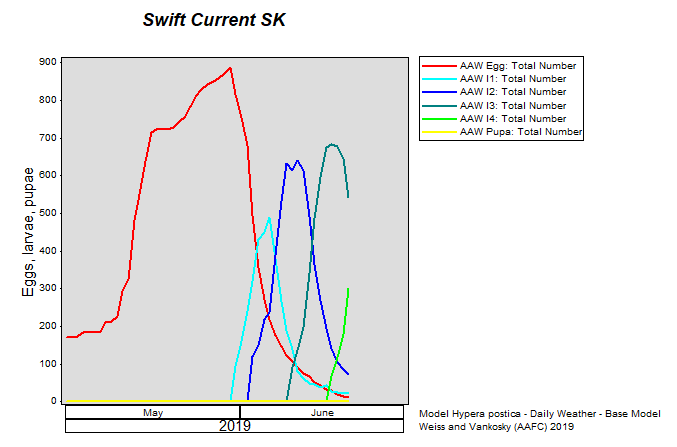 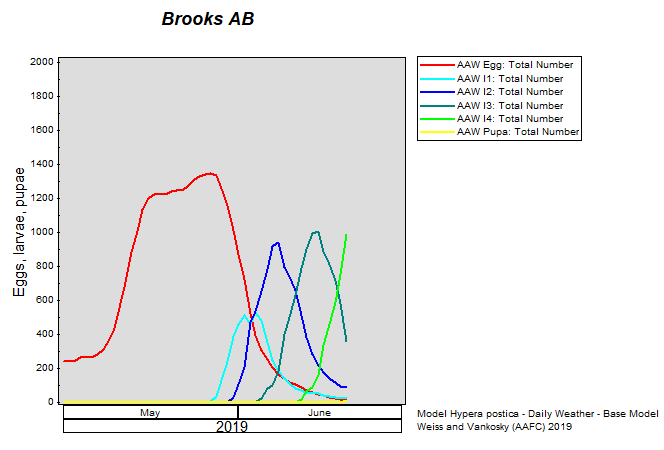 Model output based on meteorological data up to May 27, 2019 and projected to June 15, 2019 indicates that alfalfa weevil larvae, if present in the Swift Current and Brooks regions, will reach the second instar in a few days and the third instar about one week later. Model predictions are based on meteorological data and the temperature requirements for alfalfa weevil development and do not reflect or predict population densities in these regions. Figure 1 predicts the development of alfalfa weevil over the next few weeks at Swift Current SK and Figure 2 for Brooks AB.

The models are initiated with a randomly selected number of individuals (not reflective of actual insect numbers in alfalfa fields). In the figure, each developmental stage of alfalfa weevil is represented by a different coloured line. The ‘appearance’ of each successive developmental stage in the field is expected to occur when the number of individuals raises above zero. In Figure 1, alfalfa weevils are predicted to reach the second instar (dark blue line) beginning in early June and reach the third instar (green line) about a week later. 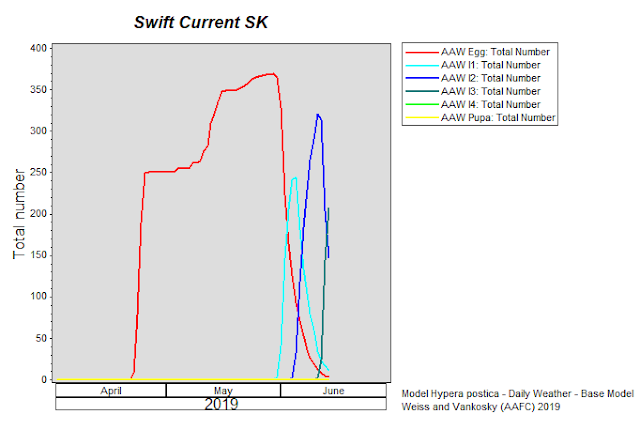 Figure 1. Predicted timing of the development of alfalfa weevil at Swift Current SK in spring 2019. 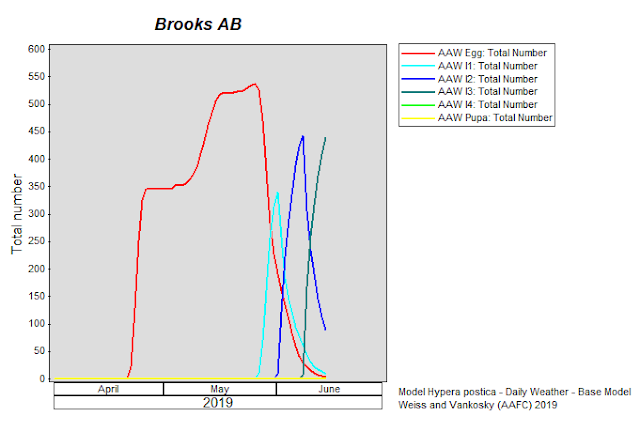 Figure 2. Predicted timing of the development of alfalfa weevil at Brooks AB in spring 2019.

Alfalfa weevil oviposition and egg development for May 13, 2019:

A DYMEX model was developed for Alfalfa Weevil that can be used to predict the timing of developmental milestones based on abiotic conditions. Model output for May 13, 2019 indicates that alfalfa weevil oviposition is underway and initial embryonic development has begun. The oviposition index provides an indication of relative oviposition rates across the prairies. The model predicts that the most eggs have been laid around Winnipeg and Regina, as well as a large region in Alberta extending from the US border to fields east of Calgary (Figure 1). Across the region, embryological development is just beginning, with development ranging from 1 to 6.5% (Figure 2). The greatest development is predicted to have occurred in southern and central regions of Alberta and west-central Saskatchewan. 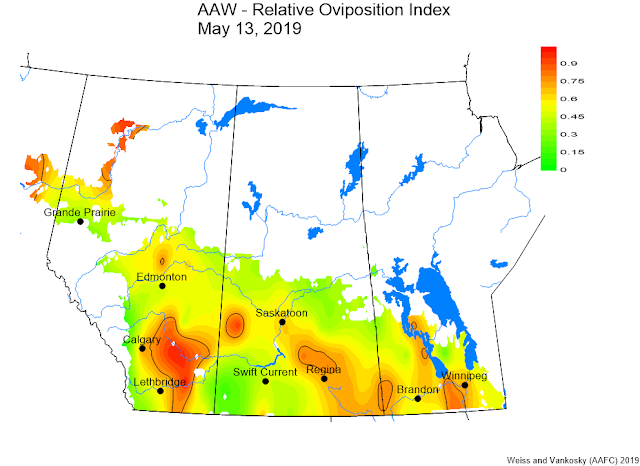 Figure 1. The oviposition index is used to indicate where the most Alfalfa Weevil eggs have been laid, where 0 indicates no eggs and 1 indicates high relative egg numbers. 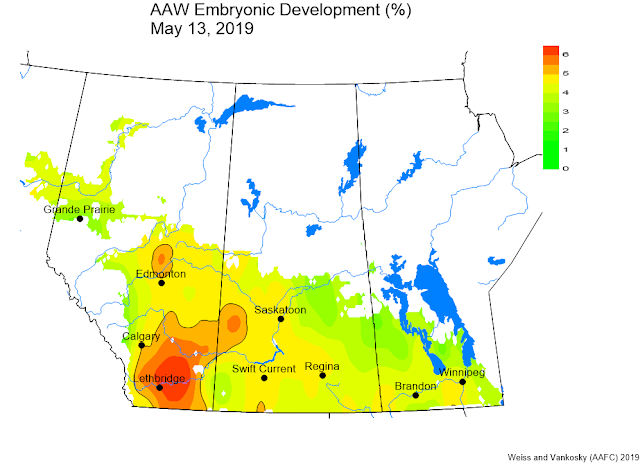